At ARL-MLS extensive investigations have been carried out towards the design, development and optimization of several aerospace systems and components for real world applications. We adopt state-of-the-art testing and manufacturing practices for developing real-time solutions in applications such as aeroengines, turbomachinery, avionic systems and aerostructures (Landing gear, wingbody, propellers, Cabin Acoustics, etc.). Our focus lies in developing novel lightweight, robust, reliable and resilient solutions while adopting concurrent engineering practices for easy industrial assimilation. Some of the challenges we overcome include:

To overcome the many global challenges in the field of Aerospace Engineering, ARL – MLS has been actively developing cutting edge solutions such as: 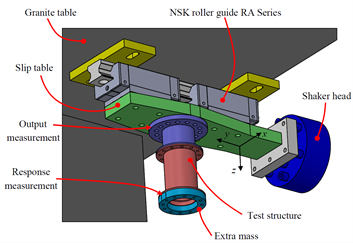 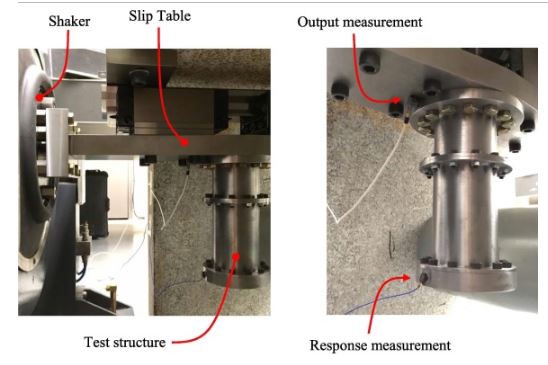 Bolted flanges in aero-engine casings exhibit a nonlinear response when subjected to forced vibration. The current models for the structural dynamic analysis of bolted flanges are accurate, but they are cumbersome for the design of new structures. These models either require model updating from modal testing, or they require a large number of nonlinear elements. This study presents a new lump model that accounts for the nonlinear phenomena of partial clearance and friction, and has analytical parameters related to the flange geometry. The model was implemented in finite element analysis and compared with an experiment where a test structure is excited by an electromechanical shaker. The lump model predicts the structural response better than a traditional linear method; yet it does not require model updating, and it uses a very limited number of nonlinear elements. The model is therefore well suited for the early design phase of new aero-engine casings. This study supports the use of geometric lump models in the field of nonlinear structural dynamics. 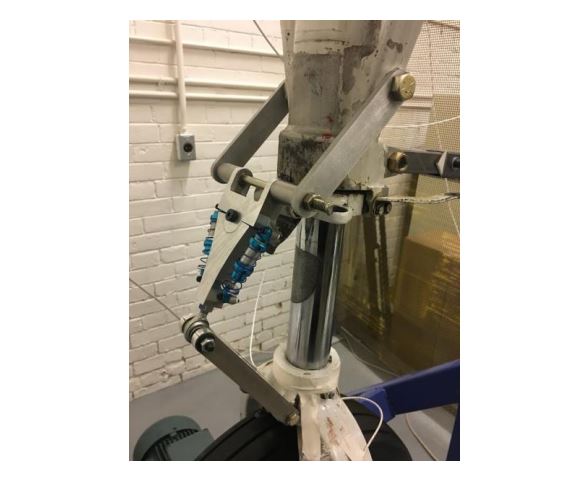 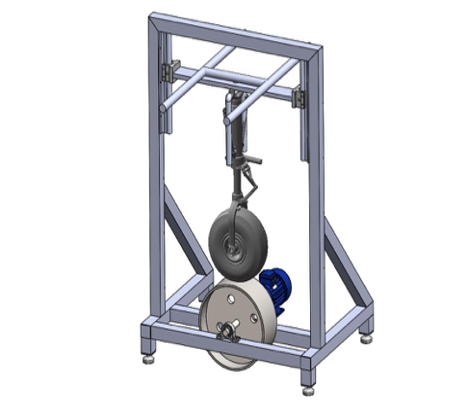 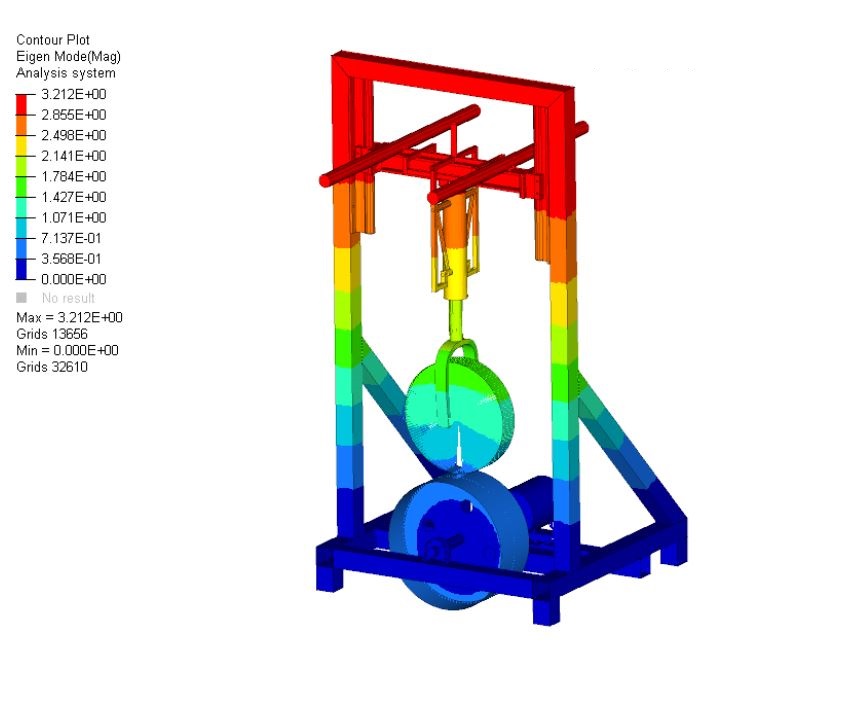 Passive vibration suppression devices known as shimmy dampers are vital in maintaining stability and safety of certain landing gears. Yet, systematic design, performance analysis, and optimization of such devices are rarely discussed in the literature. This paper presents structural design optimization of a novel shimmy damper for nose landing gears. This new design is a multifunctional mechanism integrating the shimmy damper into the torque link system of the nose landing gear. It features symmetric load distribution, and it can be tailored to existing nose landing gears. Here, the damper design concept is developed in the structural sense and optimized for the nose landing gear of a Piper Cheyenne aircraft. Dynamic loads from a representative shimmy scenario are employed in the analysis and design procedures. Utilizing equivalent static load method, topology optimization with transient loads is performed to obtain optimal material distribution satisfying the objective function and constraints. Flexible multibody dynamics analysis based on a high-fidelity finite element model is utilized in the analysis of design candidates and for validating the final design. To ensure adequate strength under the dynamic torque loads and to offer sufficient damping needed for stabilizing the nose landing gear, a three-piece torque link mechanism emerged through multiple design iterations guided by the topology optimization. Using numerical simulations, the final design is shown to satisfy the strength requirement while providing sufficient damper stroke. The results from the present study signal a vast potential in improving shimmy mitigation strategies by eliminating the need for costly redesigns of landing gears susceptible to shimmy. 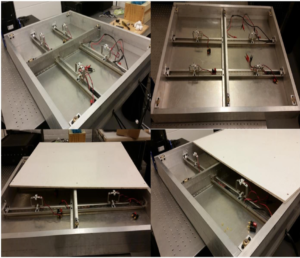 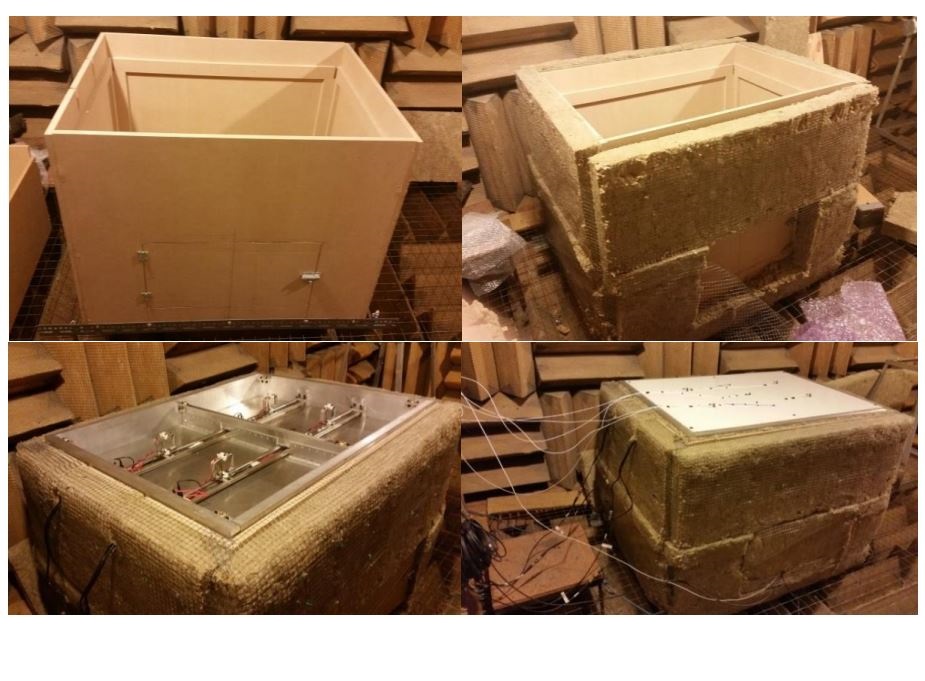 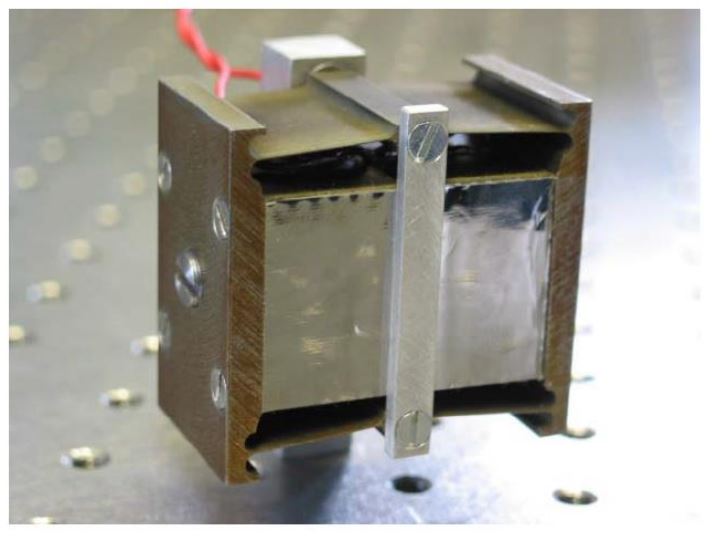 Nowadays, the level of interior cabin noise in modern aircraft has been reduced significantly compared with noise levels in the past because the double-panel design of aircraft sidewall systems has been much optimized. Furthermore, new composite materials are now used in the design of trim panels and additional sound absorption materials are also used in fuselage structures. However, this improvement in interior noise reductions is limited to mid-range and high-range frequencies (above about 1000 Hz). In fact, double-panel sidewall systems currently used in aircraft designs are ineffective at reducing low-frequency sound transmission (below about 1000 Hz). Furthermore, this problem is more likely to become much worse in the future because of the rapid progress in the manufacturing of aircraft with powerful jet engines and high speeds, which lead to increases in the exterior sound level and turbulent boundary layer vibrations. During flight, the exterior fuselage skin panel of an aircraft is subjected to incident acoustic waves with a broad range of frequencies. When the incident acoustic waves transmit through the airborne and structure-borne sound paths of the aircraft double-panel structure, sound energies with mid-range and high-range frequencies are largely absorbed by the passive noise control components, while low frequency sound waves transmit into the cabin trim panel without any attenuation. These acoustic waves vibrate the trim panel, causing sound power radiation from the panel into the aircraft cabin. The control of low frequency sound radiated power can be achieved by actively attenuating the structural vibrations of the trim panel using an effective active structural acoustic control (ASAC) method. This research presents the development and application of an effective methodology of an active structural acoustic control system for the reduction of low frequency sound transmission through an aircraft double-panel sidewall structure. The implementation of multi-input-multi-output (MIMO) controllers is used for the active control system, which electrically activates a set of novel high-performance piezoelectric actuator elements and velocity error sensors. The actuator elements are installed in the cavity between the fuselage skin panel and cabin trim panel, and arranged so as to generate out-of-plane control point forces acting on the trim panel. A set of velocity sensors is bonded on the inner surface of the trim panel to measure its structural velocities and predict its sound power radiation. 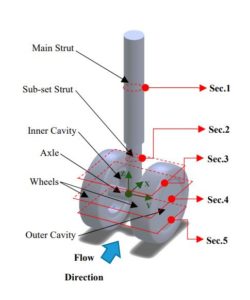 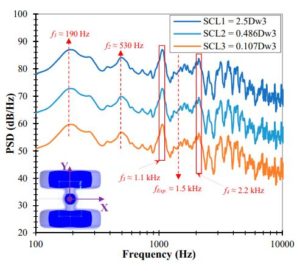 In this study, a new approach is proposed to predict the far-field noise of a landing gear (LG) based on near-field flow data obtained from multiple two-dimensional (2D) simulations. The LG consists of many bluff bodies with various shapes and sizes. The analysis begins with dividing the LG structure into multiple 2D cross-sections (C-Ss) representing different configurations. The C-Ss locations are selected based on the number of components, sizes, and geometric complexities. The 2D Computational Fluid Dynamics (CFD) analysis for each C-S is carried out first to obtain the acoustic source data. The Ffowcs Williams and Hawkings acoustic analogy (FW-H) is then used to predict the far-field noise. To compensate for the third dimension, a source correlation length (SCL) is assumed based on a perfectly correlated flow. The overall noise of the LG is calculated as the incoherent sum of the predicted noise from all C-Ss. Flow over a circular cylinder is then studied to examine the effect of the 2D CFD results on the predicted noise. The results are in good agreement with reported experimental and numerical data. However, the Strouhal number (St) is over-predicted. The proposed approach provides a reasonable estimation of the LG far-field noise at a low computational cost. Thus, it has the potential to be used as a quick tool to predict the far-field noise from an LG during the design stage. 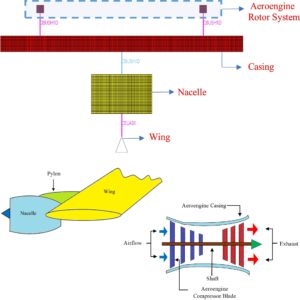 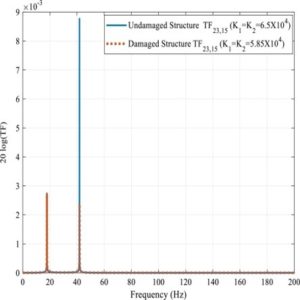 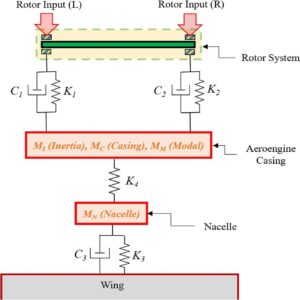 Advancements in structural safety are of prominent importance in various industrial sectors. A significant body of research has been dedicated to proposing theoretical and empirical guidelines for detecting, localizing, and assessing the severity of damage to structures. This research proposes a novel theoretical approach that employs a bond graph methodology to perform structural health assessments of aeroengine structures. In this work, a reduced aeroengine model is proposed. Using the bond graph technique, the governing dynamic equations of motion can be determined. The results obtained from the analysis can then be used to perform a structural health assessment of the aeroengine. The outcomes allow for detection and localization of any damage to the structure, based on the regions identified. In the present study, damage indicator factors have also been determined for specified aeroengine regions, which can be used to localize damage and assess the severity of its propagation in an aeroengine. The proposed theoretical structural health monitoring methodology has notable advantages over other processes proposed in the literature. The present work allows for a reduction in the cost associated with damage detection, localization, and propagation. The proposed theory offers an accurate theoretical benchmark for comparison with experimental data when assessing structural integrity. Moreover, the proposed methodology can be used to develop and implement design modifications based on design objectives, ensuring continuous and safe operation of aeroengine structures.

SE Mir-Haidari, K Behdinan, Application and implementation of the bond graph methodology on the structural damage detection and monitoring of aeroengines, Aerospace Science and Technology,117, 2021, 106910,