Progress in science and industry needs the knowledge, production and utilization of newly customized materials such as laminated composites, nanocomposites, porous and functionally graded materials. Smart material solutions are developed while incorporating self healing, active piezoelectric and shape memory characteristics. At ARL-MLS, we focus on developing the aforementioned solutions while providing resilient, eco-friendly and biocompatible solutions to industries. Advanced material exploration and investigative methodologies such as atomistic, micromechanics, multiscale modelling are enacted towards characterization and improvement of material properties for applications in aerospace, biomedical and engineering structures. Our goals are to overcome the following challenges such as:

To overcome the many global challenges in the field of Materials Engineering, ARL – MLS has been actively developing cutting edge solutions such as: 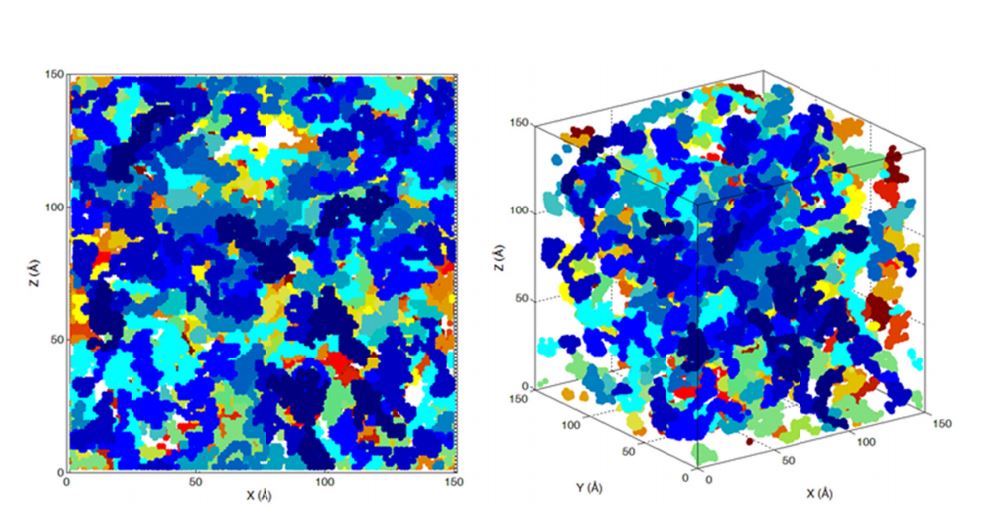 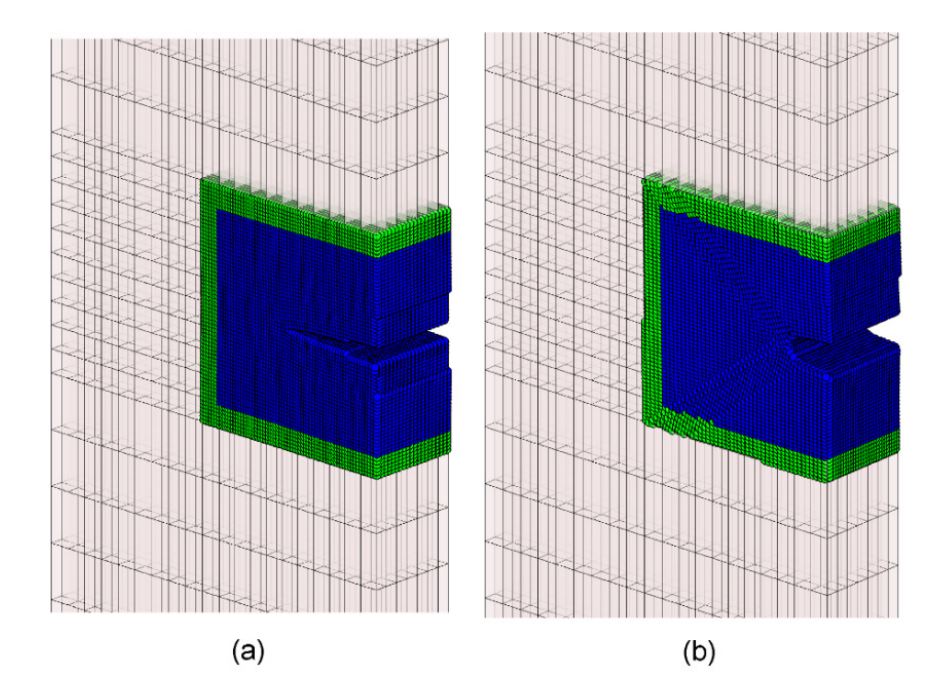 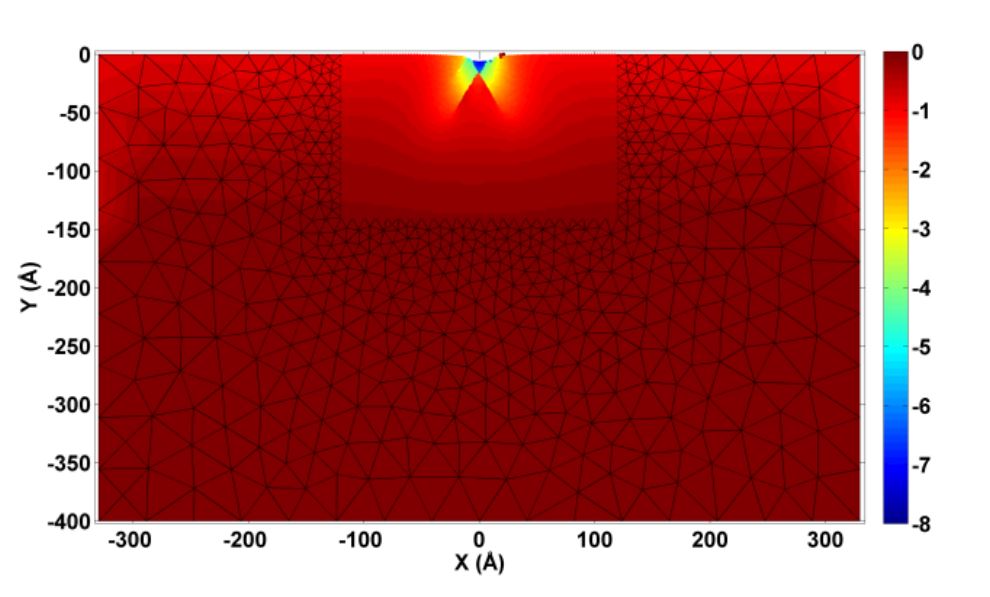 Composite and nanocomposite materials exhibit behaviour which is inherently multiscale, extending from the atomistic to continuum levels. In composites, damage growth tends to occur at the nano and microstructural scale by means of crack growth and fibre-matrix debonding. Concurrent multiscale modeling provides a means of efficiently solving such localized phenomena, however its use in this application has been limited due to a number of existing issues in the multiscale field. These include the seamless transfer of information between continuum and atomistic domains, the small timesteps required for dynamic simulation, and limited research into concurrent multiscale modeling of amorphous polymeric materials. The objective of this thesis is thus twofold: to formulate a generalized approach to solving a coupled atomistic-to-continuum system that addresses these issues and to extend the application space of concurrent multiscale modeling to damage modeling in composite microstructures. To achieve these objectives, a finite element based multiscale technique termed the Bridging Cell Method (BCM), has been formulated with a focus on crystalline material systems. Case studies are then presented that show the effectiveness of the developed technique with respect to full atomistic simulations. The BCM is also demonstrated for applications of stress around a nanovoid, nanoindentation, and crack growth due to monotonic and cyclic loading. Next, the BCM is extended to modeling amorphous polymeric material systems where an adaptive solver and a two-step iterative solution algorithm are introduced. Finally, the amorphous and crystalline BCM is applied to modeling a polymer-graphite interface. This interface model is used to obtain cohesive zone parameters which are used in a cohesive zone model of fibre-matrix interfacial cracking in a composite microstructure. This allows for an investigation of the temperature dependent damage mechanics from the nano to microscale within polymer matrix composites due to transverse loading. Results from the simulations indicate that the BCM creates a seamless coupling between continuum and atomistic domains for crystalline material systems while substantially reducing force imbalance for amorphous material systems. Multiscale simulation results of the composite microstructure indicated that the model accurately predicted both quantitative (elastic modulus, strength, stress-strain response) and qualitative behaviour when compared to experimental results from the literature. 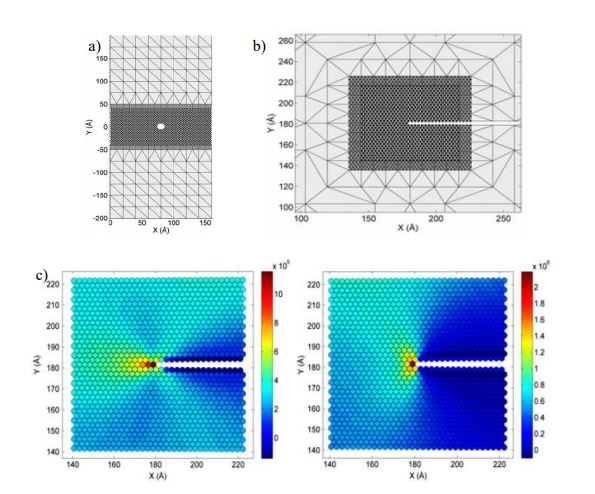 The mechanical behavior of Nextel 720 ceramic matrix composite fibers was modeled using a novel multiscale modeling technique called the Bridging Cell Method (BCM). The BCM divides the system into three domains: atomistic, bridging, and continuum. The main advantage of the BCM is seamless coupling between the atomistic and continuum domains. The BCM allows considering the effects of the nano- and micro-structural characteristics of the material when modeling a macro-scale bulk. It incorporates interatomic potentials and quasi-harmonic calculations to find the final state of the system, while avoiding high strain rates and small timesteps.

First, Alumina and Mullite BCM sub-models were generated and validated via existing experimental data, across a range of temperatures. Then, the Nextel BCM was generated by combining the two sub-models. The mechanical properties of the as-received Nextel fibers were investigated in tension via micro-tensile testing and the results – evaluated in terms of the ultimate tensile strength (UTS), failure strain, and elasticity of the fibers under uniaxial loads – were used to validate the Nextel BCM model at room temperature. This model was further used as a benchmark, and a temperature-dependent formulation was employed to account for the temperature effect.

The temperature-dependent Nextel BCM was tested under uniaxial tensile loads ranging from room temperature to 1700°K and the results were validated via experimental data obtained from the literature. The high-temperature drop in fiber strength was predicted by the Nextel BCM as a result of implementing the fibers’ microstructural evolution into the model, caused by phase transformation occurring at higher temperatures. The model was further validated with the fracture behavior of the fibers at room and high temperatures by implementing inter- and intragranular cracks. Overall, the results show that the Nextel BCM can predict Nextel 720 fibers’ mechanical behavior across a range of temperatures. 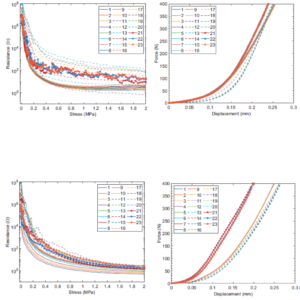 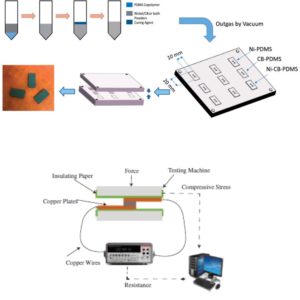 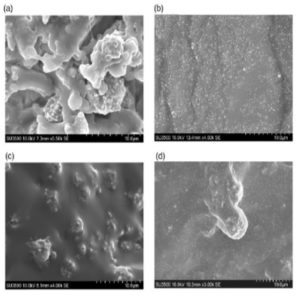 This paper presents an experimental investigation of single and hybrid carbon black and spiky nickel-filled conductive composite to understand the synergy effect when different types and shapes of fillers are combined in a silicone polymer matrix. The electrical and mechanical properties of the conductive composites are measured under a compressive loading cycle. The results showed that the electrical properties of the hybrid conductive polymer composites have a better repeatability at low filler ratio as compared to the virgin nickel or carbon black composite. The new hybrid composite piezoresistive behavior is similar to a high filler ratio nickel composite. This study provided insights to develop a tailored conductive composite with a low mass-ratio and different morphology of fillers. 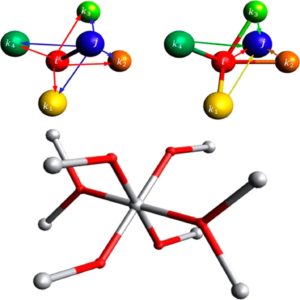 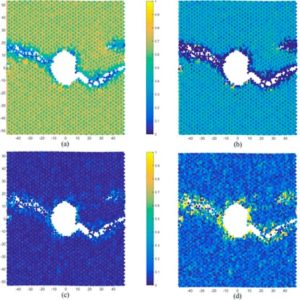 Crystalline characterization poses a challenge when atomic deformation and phase transformation are occurring in an atomic simulation. Crystalline solids are typically characterized by parameters used to classify local atomic arrangements in order to extract features such as crack tips, dislocations, and free surfaces. One such characterization parameter, the common neighborhood parameter (CNP), has been used as an approach to characterize those features with an enhanced formulation applicable to non-monoatomic interactions. The present work introduces a novel approach that extends the CNP to characterize crystalline structures by means of cumulative common neighborhood parametrization (CCNP) for arbitrary structures. The method is compared with the centrosymmetry parameter (CSP) and the common neighborhood parameter (CNA). The methods were applied to a molecular dynamics (MD) simulation of uniaxial tension in an aluminum nanowire. The results showed CCNP’s superior performance in detecting distinct surface features from bulk features with excellent parameter value ranges. The method was also extended to characterize a complex P42/mnm space group, non-monoatomic crystal with no common first-nearest neighbors in a type I MD fracture simulation. The data refinement of the proposed method was applied to extract surface features like edges, roughness, corner, and undeformed surface atoms.

A Radhi, V Iacobellis, and K Behdinan, A Cumulative Approach to Crystalline Structure Characterization in Atomistic Simulations, The Journal of Physical Chemistry C, 2018, 122 (24), 13156-13165 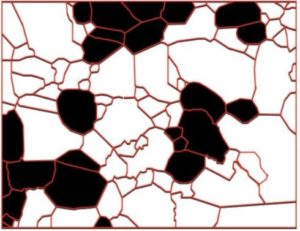 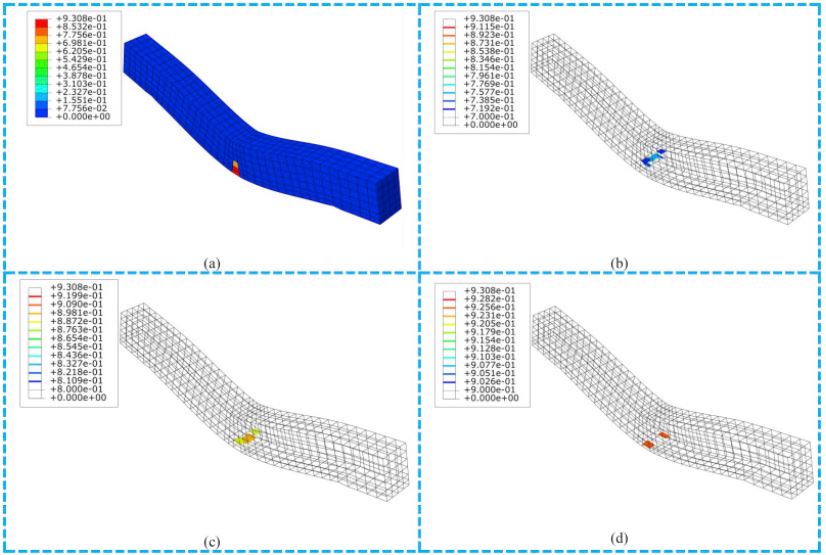 A finite element analysis of an Ultra-High Temperature Ceramic (UHTC) composite was conducted to observe the self-healing property of such a class of materials during damage propagation. In this work, a constitutive relation is presented to the composite that couples oxygen kinetics in from UHTCs additives with quasi-brittle damage propagation. The model is solved in a finite element framework, with polycrystalline multiscale material calculations obtained through a Representative Volume Element (RVE) calculation. The self-healing was obtained from self-healing time population and strength recovery during fracture for passive oxidation conditions, while accounting for loading beyond fracture limits and reloading past such limits. The oxidative model set by an Arrhenius relation is used to show the passive oxidative reaction role in changing the constitutive relation through change of a damage parameter for a quasi-brittle constitutive model. A single element study has been introduced to illustrate both the constitutive behavior and the self-healing population with time during passive oxidation at multiple temperatures. Also, a model was set to obtain the flexural strength of a Zirconium Diboride-30% Silicon Carbide ceramic composite to observe the strength recovery from oxidative additives for loading and reloading. The model captured the flexural strength recovery during reloading past the fracture limits and concurrent passive oxidation, where the strength has increased from 675 MPa to 746 MPa. 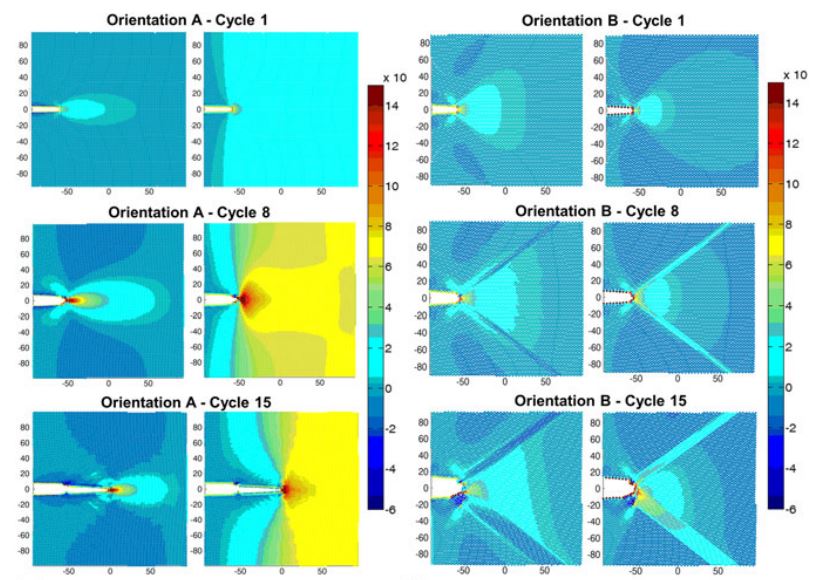 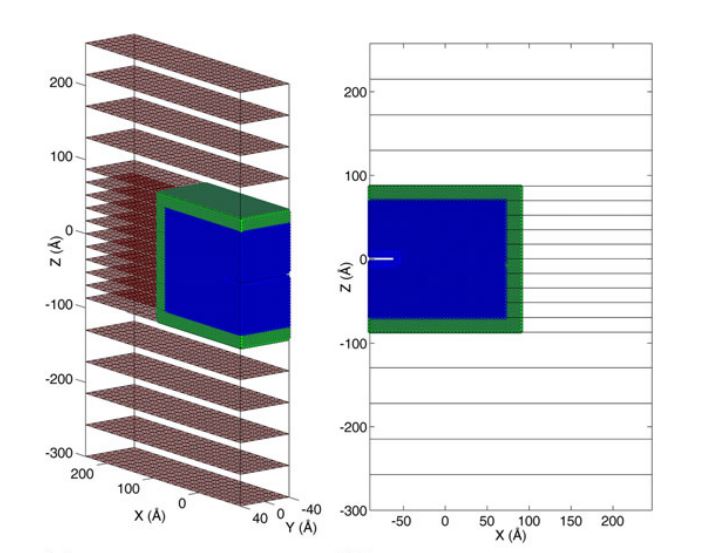 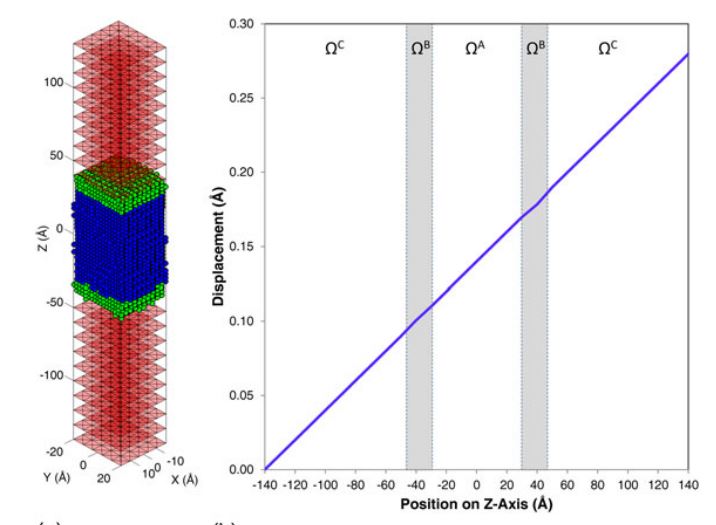