At ARL-MLS we develop cutting edge structure solutions ranging from the design of lightweight robust structures to advanced piezoelectric sensors. Equipped with state-of-the-art testing and simulation capabilities, extensive research is conducted on the development, modification and rectification of several global challenges while suggesting innovative engineering structural solutions. A few of our research goals include:

To overcome the many global challenges in the field of advanced structures, ARL – MLS has been actively developing cutting edge solutions such as: 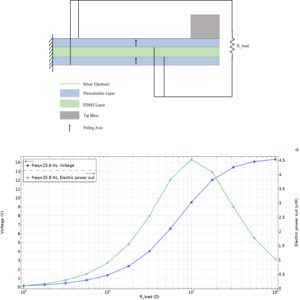 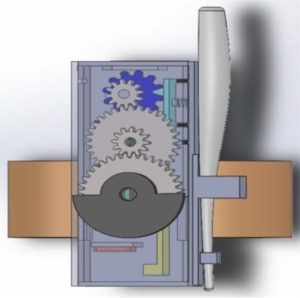 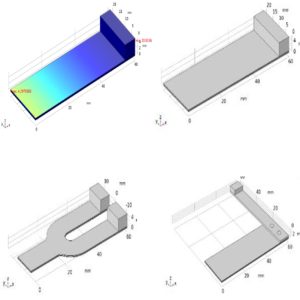 Sweeping developments in microelectromechanical systems and low power electronics have pushed the need for piezoelectric energy harvesters  (PEHs). Increasing environmental and biocompatibility issues have drawn interest in lead-free piezoelectric materials. In this paper, cantilever-type PEHs at centimeter scale have been proposed to harvest the energies of low-frequency vibrations caused by a human's movements. The proposed PEHs are made of a passive PDMS substrate sandwiched between two active nanocomposite layers with embedded piezoelectric zinc oxide (ZnO) nanowires. Moreover, two different morphologies including PEHs with constant and tapered thicknesses have been considered. The material properties of such piezoelectric nanocomposites are calculated by an electromechanical model. Afterward, these novel PEHs have been developed in COMSOL Multiphysics and their static and dynamic performances have been investigated. The static study shows that tapered PEHs endures lower stresses. However, the dynamic study discloses that the rectangular design outperforms the tapered one in electrical power and resonance frequency. It is found that the rectangular design can produce 4.1623 μW at the resonant frequency of 25.8 Hz. 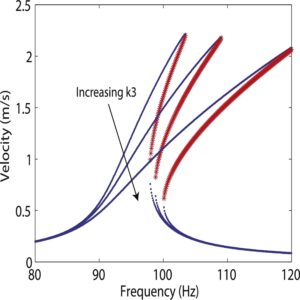 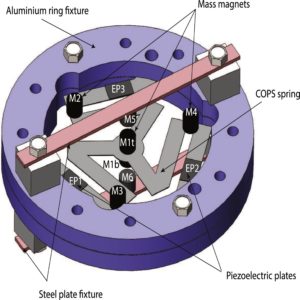 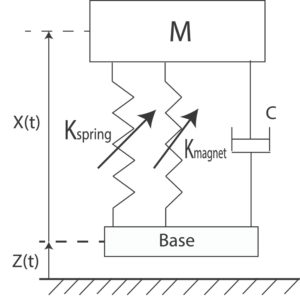 We proposed a nonlinear multi-mode tri-leg compliant orthoplanar  spring piezoelectric vibration-based energy harvester (COPS-PVEH),  which provided the improved performance using a pure geometric  nonlinearity, in terms of a wide bandwidth, and a high-voltage output  in forward and reverse sweeps. This paper presents an application of  magnetic force interaction to further enhance the performance of the  COPS-PVEH. A repulsive magnetic force is added to the spring to change the harvester system’s stiffness. A lumped parameter model is derived and analytically solved for the designed harvester with a magnetic coupling. The experiments are carried out by adding a moving magnet at the center of the spring and a pair of fixed magnets at the top and bottom sides of the harvester. Both experimental data and simulation results show the benefits brought through the dynamics of a magnetic oscillator. In an experiment by adding magnetic force, a slight increase is observed in the operating bandwidth and a 10% increase in the magnitude of voltage output is achieved at the same excitation level. The magnetic interaction on the COPS-PVEH with an addition of multiple masses has also achieved an increase in voltage output and bandwidth. In addition, the gap between the three vibration modes has been reduced. 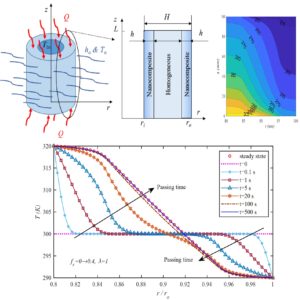 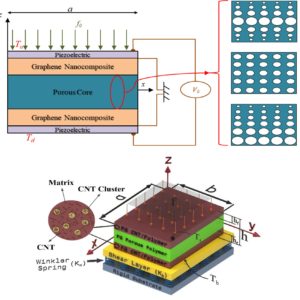 In this paper, damped dynamic deflections of an advanced piezoelectric  sandwich plate (APSP) subjected to thermo-electro-mechanical loads  have been studied using a meshless method. In the considered APSP, two active piezoelectric layers are attached on to the faces of a passive advanced structure consisting of two thin graphene reinforced nanocomposite (GRNC) layers and a thick porous polymeric core. In GRNC layers, graphene content is assumed to be varied according to functional distribution profiles. Using modified Halpin-Tsai’ equations, temperature dependent material properties of nanocomposite layers have been determined. Reddy’s third order theory of plates (called TSDT) is utilized to obtain the coupled governing equations, and MLS shape functions are adopted in the meshless solution. The influences of graphene content, porosity, temperature, electro-mechanical loading and structural damping on dynamic deflection behavior have been investigated. The results reveal that adding graphene volume fraction from 3% to 7% significantly affects the damping ratio, settling time and dynamic response of APSPs. However, further addition of graphene content has little effect on those responses. Moreover, embedding more pores in the core layer remarkably changes the damped dynamic behavior of APSPs due to a significant reduction in structural weight and a slight decrease in structural stiffness.

Design of a high-performance hybrid actuator 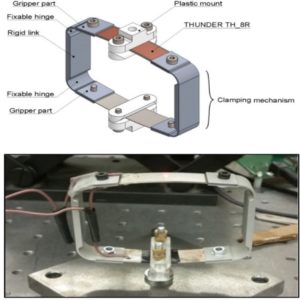 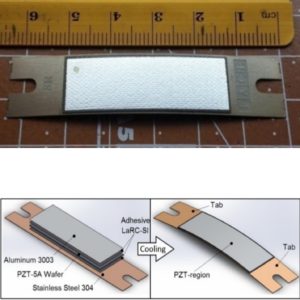 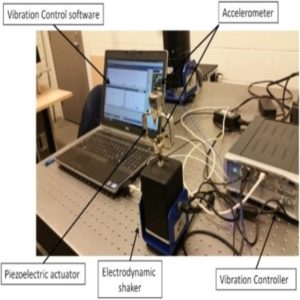 This paper presents the model and design of a novel hybrid  piezoelectric actuator which provides high active and passive  performances for smart structural systems. The actuator is composed of a pair of curved pre-stressed piezoelectric actuators, so-called commercially THUNDER actuators, installed opposite each other using two clamping mechanisms constructed of in-plane fixable hinges, grippers and solid links. A fully mathematical model is developed to describe the active and passive dynamics of the actuator and investigate the effects of its geometrical parameters on the dynamic stiffness, free displacement and blocked force properties. Among the literature that deals with piezoelectric actuators in which THUNDER elements are used as a source of electromechanical power, the proposed study is unique in that it presents a mathematical model that has the ability to predict the actuator characteristics and achieve other phenomena, such as resonances, mode shapes, phase shifts, dips, etc. For model validation, the measurements of the free dynamic response per unit voltage and passive acceleration transmissibility of a particular actuator design are used to check the accuracy of the results predicted by the model. The results reveal that there is a good agreement between the model and experiment. Another experiment is performed to teste the linearity of the actuator system by examining the variation of the output dynamic responses with varying forces and voltages at different frequencies. From the results, it can be concluded that the actuator acts approximately as a linear system at frequencies up to 1000 Hz. A parametric study is achieved here by applying the developed model to analyze the influence of the geometrical parameters of the fixable hinges on the active and passive actuator properties. The model predictions in the frequency range of 0–1000 Hz show that the hinge thickness, radius, and opening angle parameters have great effects on the frequency dynamic responses, passive isolation characteristics and the locations of their peaks and dips. Furthermore, the output actuating force can be improved by increasing the hinge hardness, which is controlled by its dimensions, although increasing the hinge hardness may cause a decrease in the free displacement and passive insulation performance, particularly at low frequencies.